Some interesting facts about traumatic brain injury for you to ponder with your own functioning brain; well, some of you may be fully functioning. For the rest of you, you might want to stop reading. I’m not sure I’m going to put any more pictures.

How many people have TBI?

1.4 million people sustain a TBI each year in the United States. Of those 1.4 million, 50,000 die; 235,000 are hospitalized and 1.1 million are treated and released from the emergency room. The unknown are those that do not seek treatment in an ER or receive no care.

What are the costs of TBI?

Direct medical costs and indirect costs such as lost productivity of TBI totaled an estimated $60 Billion in the United States in 2000.

What are the long term consequences of TBI?

The Centers for Disease Control and Prevention estimates that at least 5.3 million Americans currently have long term or lifelong need for help to perform activities of daily living as a result of a TBI.

According to one study, about 40% of those hospitalized with a TBI had at least one unmet need for services one year after injury. The most frequent unmet needs were: Improving memory and problem solving, Managing stress and emotional upsets, Controlling one’s temper and Improving one’s job skills.

This information provided by the CDC was updated July 2006. 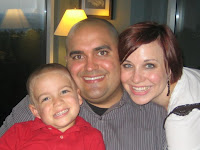 Details. Well, in July we celebrated, a lot. It was Danny’s birthday, his brother’s and his mother’s. Plus, it was his parents anniversary. We celebrated Danny’s birthday all week, I swear. Here is a picture of the family on Danny’s actual birthday.

Corbin attended many summer camps at his preschool and had an absolute ball. The last week was Dinosaur theme and as he told me, he “ruled the school.”

Danny has continued to improve physically at Beyond Therapy and we are of course, very pleased. He has begun to do some major abdominal exercises; I watch and feel glad it’s not me. Although, truth be told, I probably need to get down on the ground with him. I’m also happy to report that on Monday of this week, he walked the length of the gym with his walker, with NO assistance; no one was helping him guide his walker and no one was holding onto his gait belt. However, there were people there just in case he needed help.

He did need help a few weeks ago. Into every one’s walking, a little falling must happen too. (By the way, if you know Danny’s grandmother, please don’t mention Danny falling. We don’t need to worry the woman for nothing). Yes, he did fall, but he wasn’t hurt. Ironically, he was gaiting with Candy, Super Therapist, when he tripped over the threshold and played Leap Frog with his walker. The fantastic thing is that Danny reacted and put his arms out to break his fall and held his head back. Remember the days when he couldn’t even control his head? Anyway, Candy told him it’d probably happen again, just like babies when they’re learning and that they’d be practicing falling. Nice. Sounds like fun. I hope I’m not with him that day.

So, you might be wondering why in the world I titled this post “Brain Dump” and why I started with a bunch of stats. Well, here it comes.

First of all, I’ve been dumping my brain the last couple months with creative mash. Obviously, none of that energy went towards this blog since I think I OD’d in the other areas. Let me fill you in on what is happening, or what I’m trying to make happen.

Next week, my cousin and her family are heading this way for our other cousin’s wedding. Well, on the front end of this trip, T’s husband will begin filming for a promotional video of our journey. You can view his work at http://www.thereideffect.com/. He is extremely talented and I’m thrilled to see how you can be brought into our lives a bit more. Anyway, in order to help him out on the front end, I have had to compile pictures and video from the last almost four years. It’s kind of hard to do that effectively when the hard drive on your Mac fries and you have to wait for a new one to be installed. I’m not bitter though.

I’ve also had to come up with a timeline of events since August 2005, an outline for the film and questions for interviews. Brain dumping to the max and it’s hard to try to market yourselves. I can come up with a bunch of marketing ideas for other things, but how do I market my own family and our strange trip over the last four years?

And, because our story would not be complete without the addition of Dr. Kaelin and Candy, I had to arrange for interviews through Shepherd’s PR department. In doing so, I included our Web site and the blog so that they knew we were for real and not some nut jobs; well, we might be, but our story is real. Nonetheless, Shepherd responded with support of our project and pitched one of their own. They may like to feature our story in one of their upcoming issues of Spinal Column Magazine. Wow! Wouldn’t that get our message out to a mass of people? I’m not sure exactly what the message is as right now, it feels like the outbox is full of them.

So, we’ve got a short promotional film in the works, a potential article to be sent to hundreds of people via Spinal Column, and because of those two things, our Web site needs to be revamped. I want to be able to reference our Web site in both the film and article, but it needs to be one place where people can view everything; not one for old stuff and one blog for new stuff. Plus, I’d like to be able to post the film on the Home Page.

While I’m at it, if we’re going to market ourselves, we need a logo. What in the world am I going to use as a logo? Not motorcycles. Not wheelchairs. So, I’ve come up with an idea, but I still have to touch base with the guy that designed Danny’s Southland Choppers logo years ago. Once I have that, then we can build the new Web site around that and then make t-shirts!

Can you see where I’ve brain dumped myself into creativity? It’s become overwhelming, but at the same time, I’m excited to get rolling on all of it.

If anyone out there is or knows of someone that does t-shirts for fundraising, please email me at the address on the right side of this page.

While pulling everything together for the film, reading over past updates, coming up with questions for interviews, even mine, and coming up on the fourth anniversary of the accident; well, it has me in an emotional tizzy.

Danny walking again will be an overwhelmingly awesome experience; a goal that we once thought was unattainable; evidence of God’s glory and of a persevering faith.

However, Danny walking again does not restore his brain, his heart, his soul. Brain dump.

Pointing back to those statistics at the top and those pesky unmet needs, my biggest question for God is when, if are those needs going to be met. I’ve mentioned this before and I may have painted a small picture of the reality, but there are brief moments when it feels that I don’t know the man I live with. I’m not even sure if he knows himself.

Without going into too much detail, so as not to embarrass Danny with things he doesn’t remember saying or doing, there are times when Danny gets very agitated that he is out of control. What do I mean by that? Most of the outburst is verbal and the physical part is him trying to leave the situation, whether it be pushing away from the counter or trying to leave the room. Obviously, he gets more frustrated because he can’t leave the room or the conversation adding to the problem.

Thankfully, until a couple weeks ago, Corbin had not seen Danny go to what I can only describe as the crazy, psycho place. I know that sounds cruel, but it is truly so out of Danny’s character that it feels crazy. Danny was upset with me because I refused to help him do something (he is able to do it himself which is why I refused). He began to yell and physically began to try to push himself away from the sink, and he pushed his legs so hard that the footrests’ posts came out of the holes. Hello, crazy, psycho place. Unfortunately, Corbin heard the commotion and drove his little car to the doorway and told Daddy to stop it. Daddy in turn told him to stop. Danny went into his child and I had to quietly reprimand him. He calmed down and did not remember it when I asked him about it later.

Later, I had to have a talk with Corbin about Daddy and his brain. It was something to the effect of because Daddy hurt his brain, sometimes he says and does things that he doesn’t mean, but that doesn’t mean that Daddy doesn’t love you very much. Yeah, that was fun. I just pray on some level that he understands or that God protects him from the memory of those moments. I pray that he sees Daddy for the man that he is, that he wants to be, that he is working to become.

Folks, we’re dealing with a brain injury. There is no healing except that which comes from God and I need your help in praying for Danny’s mind. His mind is the source of all that is “off” in him, in his body. I don’t know how God’s going to do it, but I need it, we need it.

I pray that with the end of physical dependence, these frustrations that seem to spawn wild-eyed angry moments will also cease. But, what if the frustrations just move to something else? I have no answers to any questions, except Jesus.

Without Him, I am nothing, I have nothing, I can do nothing. Without getting too super spiritual on here, I have really come to understand that without God, my life, our lives cannot transform. Does that make sense? I’m really at the end of my ability; I can’t heal some one’s brain. There is no medication, no stem cells, no acupuncture, no positive thinking that will restore Danny’s brain. His injury is categorized as Diffuse Axonal Injury. That means, that the injury is throughout his brain, not localized. Google it.

So if we need God to really intervene here, why hasn’t He already? What is He waiting for? Maybe me, maybe Danny, maybe it’s you. Maybe our story has to continue to reach more people. Again, I have no answers. I can only cling to the Promises He gives us in His Word. It’s all I have left to depend on without fail.