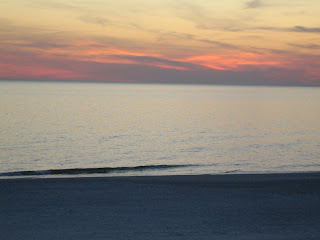 I love to read and I love a deal so I buy my books at Costco, but only paperback and only if it’s an author I’ve heard of or if the cover intrigues me. It’s all about the marketing.

Anyway, I have been reading more in the last year; only fiction as a means to escape from my reality and into someone else’s tale. It works, keeping my mind on something else is nice.

Well, I happened by Costco and picked up a few paperbacks feeling confident in my selections. I read the first one by Harlan Coben (fabulous) and then picked up Nicholas Sparks “The Choice.” Now, I hear all you “The Notebook” fans yelling at me that I would only be torturing myself with a Sparks novel, but I felt okay about reading a real love story. They aren’t always happy endings which is true life, right?

I did read the back of “The Choice” and it was rather vague about the decisions this couple has to face to keep hope alive in their love, or something like that. The majority of the book was a flashback of sorts on the way the met, fell in love and what led this man to the hospital.

WARNING: If you haven’t read the book and don’t want it to be spoiled a bit, stop reading and pick up later in this post.

Anyway, Travis is in the hospital to see his wife who is a doctor, but she’s not there working, she’s been a patient for 84 days after a car accident rendered her comatose.

Oh, PERFECT! This is just great, what I’ve walked into, read into, whatever. Now, I have spent the time getting to know this fictitious couple and enjoying an eye into their relationship and blam! I find myself in this book.

Luckily, I didn’t have to deal with the issue that Travis had to in the book. He either had to honor his wife’s wishes for her feeding tube to be removed after twelve weeks or to ignore it and hope she wakes up. I won’t spoil that for you, but it brought those early days of Danny’s accident back to the forefront of my mind.

Danny and I were young when the accident happened; I guess we still are, but I feel old. Anyway, we didn’t have wills or power of attorneys or living wills. Who’d thought we’d need something like that before our hair started to turn gray? However, months, probably years before Danny’s accident, we happened to talk about what we’d want should something happen to us. I believe it was on the heels of the Terri Schaivo case that was a focal point of the media at that time. Danny told me he’d “rather be dead than stuck in a wheelchair.”

Those words haunted me in the early and unknown days; have we outgrown the unknown days yet? No matter. I just knew Danny wouldn’t want to live if he had a choice. Thankfully, it never came to a point where a choice of life as a vegetable or death had to be made. But, there were other choices that I tried to always do as I knew Danny would want me to do. But, could I have pulled his feeding tube? Could I have turned off the machines? Praise the Lord I didn’t have to ponder those things.

But, reading this book and reading how this husband was dealing with his wife in a coma and not having answers; I understand it, been through it and have come out beaten, but not broken on the other side.

Danny continues to get better. Last week, he walked with a walker and two assistants outside. It was a big day and I was so proud of him. He has done so much walking recently at therapy; he walks in various ways at least two out of the three hours he is there. He has also been able to stand on a scale to get an accurate weight; he’s at 225lbs. And, as long as I’m with him and it’s just us or with Corbin, we ride in my car. He is able to transfer into the car with just my help and it’s amazing what a difference it makes to his attitude.

It’s been rather crazy lately what with travel schedules and Spring Break and doctor’s appointments. If you recall from the last post, Corbin and I were heading down to the beach for a week. We did have a great time and Corbin loved the sand. The weather didn’t hold up the whole time, but it was nice to get away. Of course, when we got back I developed strep throat and a sinus infection and the day after I went to the doctor, I had to take Corbin. He was diagnosed with another double ear infection. Fabulous! We survived and are now getting back in the swing of things and gearing up for summer.

Here are some pictures of our recent activities: 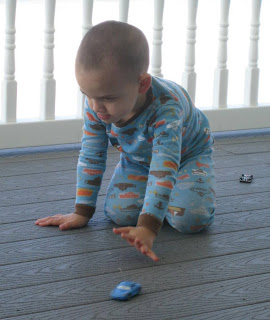 Strategic car maneuvering on the balcony at the beach house. Corbin did this several times a day. Notice he still has his pj’s on, so he starts early. Also, Mom, look at what he is doing with his mouth. Wonder where he got that look of concentration from? Must be Danny:) 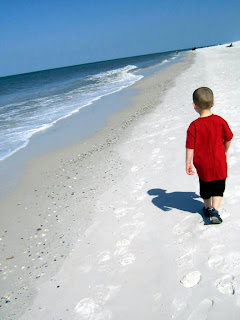 Our first walk on the beach. Corbin loved it and I got some great pictures. 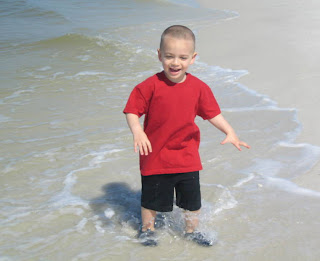 Corbin’s first moments in the ocean. About two swells later, he did a face plant into the sand. It’s a new concept to learn that the sand washes away from under your feet. You should have seen the look of confusion on his face just a split second before he realized he was going to fall. Priceless! 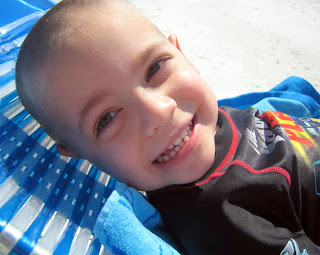 Do I really need to say anything here? I mean, who doesn’t love this face? He’s just so darn cute! 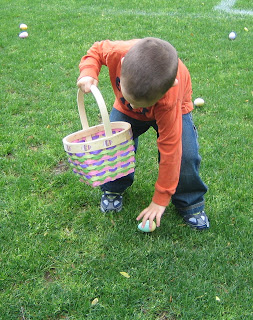 Notice it is my child who is picking up the eggs at the church’s Easter Egg Hunt. I was NOT one of those parents picking up eggs along with their child. Tacky. 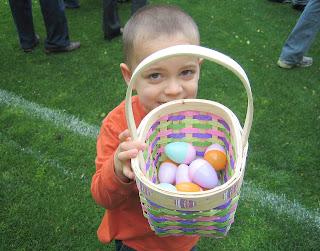 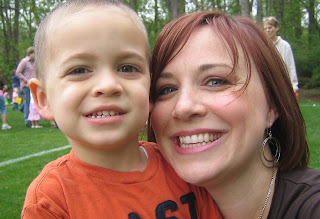 Look. It’s the fake smile Corbin learned from Danny and Mom is just trying to remember to keep her chin up a bit to make sure it doesn’t look like a double. Nonetheless, I love my boy!