Seriously, I am drawing a blank. It’s like there is so much in my head, but only a small opening to which it can gush out of there. So, what comes out first? It’s all churning and turning, like the lottery numbers, not sure what is going to eventually spit out at you.
Perhaps I should start with some basics? Basic. Basic. Basic? Yea, still drawing a blank on what is basic in our life. Everything is colored with that black crayon; all the shapes and outlines look normal and familiar, but there is no color.
**************************
Well, Corbin is the Crayola Crayon box of light in our lives and that sweet boy started school this week. 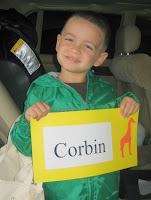 He seemed to have a good first day; however, he did confess to a single time out visit before we were even out of the parking lot. Guilty conscience, I guess. Apparently, he and one of the new boys were chasing each other during circle time. You have to watch out for those new kids.

Additionally, Corbin and I vacated GA for a week and headed west to AZ before school started. It was nice to be with family and it was even better to see Corbin play until exhaustion with his cousins; all boys! I will spare you pictures of me in a bathing suit, but here are a few shots from our trip.

Corbin finally letting go of the wall and getting in open water. Nothing like a little healthy peer/cousin pressure.

My nephews and Corbin. Even without the matching hair cuts, I think they definitely can’t deny their genes.

Dad and I took Corbin and B to Peter Piper for bad pizza and fun games. B actually took this picture of us.

Mom and I took a cooking class together which was a lot of fun.

Corbin adores his Papa and often uses missing him as an excuse for bad behavior. It’s so funny to me how he inherently figures out how to pull the strings. Corbin gets in trouble, he is crying/whining and says “I just miss Grammy and Papa.” The first time he said it, I burst out laughing.

As expected, Danny survived while we were gone, although I know he missed us. He continues to make improvements in therapy and has even transitioned some of those to the home.

While we were in AZ, Danny’s mom called to tell me that he’d done something new at home. Apparently, he got the notion that he wanted to try to hold onto the bar in the kitchen and stand up to stretch his legs and back. He didn’t tell anyone what he was doing until the last moment and wound up standing for about four minutes at the counter. I love it when he takes initiative.

However, I wasn’t too thrilled when last night while I was tucking Corbin back into bed, he decided to try to stand up out of his chair. No one around, no walker or anything else to hold on to; he was practically upright when I walked back into our room. The only body part touching his wheelchair was his hands on the wheels. Thankfully, after a mild slip into mothering him, did he realize that wasn’t the best idea, but he just wanted to see if he could do it.

What he did do today though was big news! In therapy, he climbed up and down a flight of stairs twice. A grand first and according to Candy, a “good day for Big D.”

Speaking of Candy, I have to mention how well the filming went for the promotional video. The interviews with Dr. Kaelin and Candy went better than expected and I am trying to figure out how they’re going to whittle down the footage. My interview went okay to me, perfect to them, but it was very difficult and I just hope I conveyed all that I really wanted to. Danny and I also had a joint interview which went well considering Danny has always hated to have his picture taken, which is exaggerated now. He is shy about talking sometimes because he doesn’t think people can understand him and at times, it takes him a while to get a thought out of his mouth. However, he did well and it should be good for you all to hear a bit from him too.

We’re finalizing our logo now and then work will be done for the Web site. I’m really excited to debut it all to you and hopefully raise some awareness, some funds and have fun in the process.

Speaking of fun and funds, we’re having another golf tournament next month, October 19th at Bridgemill Country Club. We’re finalizing the flyer and on line registration now, as we’re having to have the NTAF folks approve it for contributors’ tax deduction purposes. Once that is complete, I’ll include the link above in the “Mark Your Calendars” section.

Also, if you ride or know someone that does, Killer Creek Harley Davidson is holding their 3rd Annual Beau Memorial Ride with all proceeds going to Danny. It will be held on Sunday, October 25th and registration begins at 4pm. You can find details above and on the sidebar.

We hope you all will try to attend one of these events or you can always donate via our NTAF Web site. Information is at the bottom of this page.

I’d like to ask you all to pray for me. Lately, I have felt like I’m at my wit’s end and have begun questioning life and God a lot. None of this really makes any sense to me; why this happened or what we’re supposed to do with it or how long is this going to last? Will it end on earth or in heaven? Can I make it? As I said in my previous post, there are always more questions than there are answers. Going into Year Five, I think I feel very helpless and am beginning to have to push away thoughts of doubt. Doubt of what? Everything. I know God is here and has been. I know He has a plan and He has Promises, but how does that translate into my life? My faith waivers and yet through praise I am bolstered only to have the bottom fall out again. I’m tired of the cycle, the rollercoaster, the unknown. I want to be smack dab in the middle of God’s will and I need and am ready for Him to reveal His purpose so we can be used for His glory. I’m done with this chapter and want to move on to the next, so what’s the hold up?