That question can take me lots of different editorial directions, but for now let’s leave it at “does anyone really read this?”
Now, I know that writing this blog is just as good for me as it is to the few of you that actually keep up with it. The reason I ask is that it’s been pretty quiet on the comments and email sending, so it makes me think that no one is out there. Just let me know that you’re there and maybe I won’t feel so weird writing my thoughts and my life out in the big, huge world of the blogosphere.
Moving on and considering my previous post was quite introspective, I will make every attempt to keep this one informational.
Danny’s progress in Beyond Therapy has truly been picking up speed (I have attached another gaiting video for your viewing pleasure from March 13th). As most of you or perhaps none of you know, I only work part time. Mondays are my errand/Corbin days and Fridays are my take Danny to Shepherd days. This schedule works well and allows me alone time with both my boys. I have a love/hate relationship with Fridays. I love to be with Danny and see all the progress he makes, but I hate it for him that it just takes so dang long.
For the most part though, Fridays are great because I get to get the firsthand scoop from his therapists on how he performs earlier in the week. Well, a few Fridays ago, I got a huge surprise. Candy (super-therapist) asked me if Danny had told me about his 10M test, which he, of course, had not and to which she was shocked that I didn’t know. What is a 10M test, you ask. Well, it means that Danny had to walk 10 meters (imagine that) using the standard walker with only one assistant. And, he did it. I was thrilled to say the least, but it really hit me when I saw a before and after clip.
Nick (super-therapist 2) showed us a clip of Danny gaiting on 12-24-08 with three assistants; one on the stool behind him, one holding/guiding the walker and another helping him keep his trunk upright. And, just two months later on 2-24-09, Danny walked and succeeded in his first 10M Test. See? I told you things seem to be speeding along quite nicely now.
Another boost in the hope department came from another “patient” who is not apart of the Beyond Therapy, but who works out in the gym each day. I’m not even sure what his name is, but let’s call him Joe. Danny was walking up on the track one Friday with the Argo while Joe was walking his laps around the track. Joe has a spinal cord injury that he suffered six years ago when a scaffolding fell while he was working on it. Joe is dedicated to his workouts. I mean, he sweats through his shirts and is always there when we’re there. I admire his work ethic. So, while Danny was taking his laps with the Argo, Joe would walk a lap holding onto the railing and then he’d come and rest in the chair next to me which is when I got my dose of hope.
Apparently, Joe has only been able to “walk” for the past year and when he first started, he said he couldn’t even walk half a lap without taking a rest. So, he’s been where Danny is in some ways. Joe has seen Danny progress and as we’re watching Danny work with the Argo, he looks at me and says “it won’t be long now.” Inspiring. That meant just as much to me as what I hear from Danny’s therapists, perhaps more since Joe has literally walked this path. “It won’t be long now” rings in my head when I get a bit gloomy. It won’t be long now.
In all this work, we’ve had some fun too. Check out the snow in Atlanta on Sunday, March 1st. This is the view from the balcony in our bedroom. Yes, that is a cemetery, but we like it. They’re quiet neighbors. It’s too bad this pretty scene didn’t stay very long. It is beautiful from the mountain. 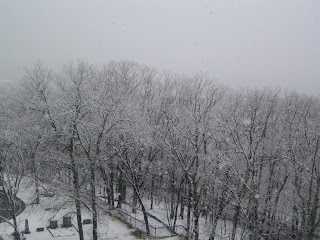 Check out these pics I snapped while we were watching American Idol last week. Boys being boys and awesome moments caught. 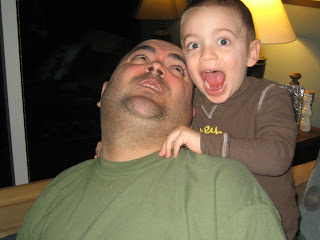 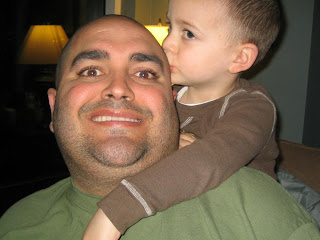 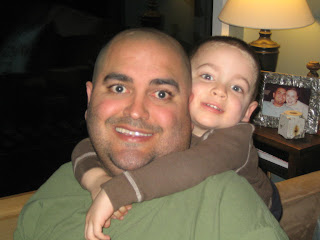 We were also blessed with a visit from my dad this past week. I was thrilled because I was able to make it a surpise for Corbin and for Danny. It never really is a vacation for him since I usually give him a Daddy-do list and he was on hand to help take Danny to therapy too. If you remember, my parents were just here during the holidays and my dad was amazed at Danny’s progress since he was here at Christmas. He says it’s like seeing a different person. Another boost of hope. Here are a couple shots while he was here. 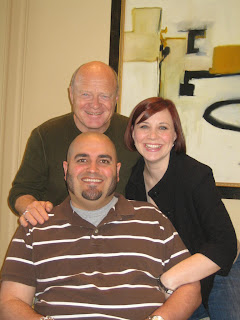 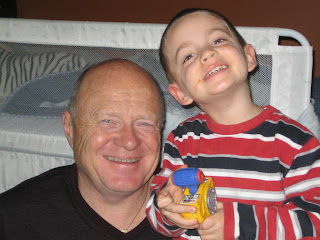 One more thing before I give you information overload, Corbin and I are headed to the beach next week. I’m so excited and can’t wait to feel the sand between my toes and the sun on my face. The last time that happened was one month before Danny’s accident and I was 7 months pregnant with Corbin. I have a feeling it’ll be just a bit different this time, but then again what isn’t different about our life since then?

5 thoughts on “Is anyone out there?”