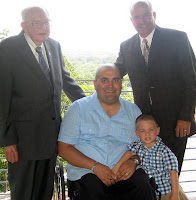 Photo taken on Father’s Day of four generations of our boys.

Now that we’re all over the age of leaving milk and cookies out for Santa (aren’t we?), Christmas gift giving can sometimes become predictable. We now make a list of what we want, hand it out to our family and because we all know it’s safest to pick from the list, we have some idea about what lies beneath the tree with our name on it.
So goes this past week in regards to Danny’s therapy. I mean, I’ve made my list of hopes, dreams and goals for Danny and our family and based on Danny’s progress I relatively know that at some point they may appear “under the tree.” I just don’t know when Christmas is and in this analogy, Christmas comes more than once a year.
Cue the scents of plum pudding candles and cookies in the oven.
It’s Christmas morning and I have already trashed through all of our gifts.
*****************
Danny had his re-evaluation last week per the requirements, I’m sure, of his qualification for insurance coverage and also, on some level, continuation in the Beyond Therapy program. These are actual tests that are timed to measure and track improvements.
The gift of results:
1. Danny beat his previous 10 meter test time by 58 seconds. We were told that you could liken that kind of improvement to beating the world record of the 100 meter dash by 3 full seconds.
2. Danny improved on his 6 minute distance by 104 ft. Again, it’s like skinny Nick beating the Kenyans in the Peachtree Road Race. The BT Team is typically happy with an improvement of 10 ft. so Danny completely blew it out of the water.
3. A first time test for Danny was called TUG – timed up and go. The gist is that he has to start sitting in a normal chair and using the walker and only one assistant, stand, walk 3 meters, turnaround, come back and sit down in the chair. Because Danny is just beginning to only need one assistant, his first time was logged at 3:03.
******************
Last Thursday, I received a text from Danny that made me stop what I was doing and call him immediately. He had gone down to Shepherd to exercise, as usual, and I guess he got the idea in his head that he and Juan Carlos, his assistant, should try walking on their own.
A peek inside my head.
What???? Um, did it occur to your brain injured head that that wasn’t so hot an idea until we got a green light from Candy aka “Super Therapist?” I mean, do you remember falling? Tell me you used the gait belt and that you were responsible enough to have someone spot your walker.
Yeah, none of that happened. Oh, me of little faith.
Danny had JC set up a chair in the middle of the lane of the basketball court and then they walked, using the walker from the sideline, around the chair and back……3 times. With no Bioness on his right leg.
Ummm….is this okay?
So, what does my brain injured husband do, who still thinks that at times that he is expert at all things? He goes and tells on himself to Candy and tells her that he doesn’t want to walk with the Bioness anymore.
And, he tells me that he wouldn’t have done it if he didn’t think he could do it. So, there!
More and more often, I’m having to let go of Danny and trust that he knows what he’s doing. It’s hard. I can’t imagine what it’ll be like with Corbin.
Back to the story.
********************
The next day, I take Danny to therapy as usual and also as usual, he is scheduled to walk his first hour. But, there was no Bioness. Just some brace type thing that went in his shoe, under his foot and up the front of his shin. Danny did great. So, they took it off. Danny did great, maybe even better than with anything at all. (See video at the end of the post).
Hmmm, I smell cookies again.
*********************
Yesterday, Danny goes to therapy again and again as usual he walks. Thankfully, Danny’s mom has her new fancy dancy HD video flip camera thing with her. It’s show and tell time when he gets home.
Who is on the video watching Danny walk without an assistive device on his leg? Candy. Who is walking with Danny? Juan Carlos, with instruction from Mark our “hey buddy” therapist. Next up, Danny is scheduled for the pool and do my eyes deceive me or is that Danny walking down the steps into the water? Yes, it is and he also walks up the stairs too.
Life needs more green lights and Candy gave some to us yesterday.
Danny has homework.
1. Stretching in the mornings to loosen up the muscles in his right leg especially.
2. Walking AT HOME with JC one short distance a day. Yes, you read that correctly. He gets to walk at home.
3. Walking at Shepherd with JC for a short time when he goes to exercise.
********************
I’m glad to cross some things off my wish list.
********************

Video from Friday, June 19th without Bioness on right leg.