Getting straight to business; below, you’ll see the flyer for the “Ride for Beau for Danny” that is taking place this Sunday, October 26th.

Beau “Grits” Horner was a well loved employee at Killer Creek Harley Davidson who lost his life in a motorcycle accident a bit more than a year after Danny’s. Since Danny is a long time friend and associate of Killer Creek, the folks there decided it best to honor two lives who greatly impacted the scene at KCHD. Therefore, the proceeds from the memorial ride will go to support Danny’s continued participation in Beyond Therapy. And, we all know how much that has improved our lives! So, pass the information on to someone you know who rides, or just come hang out with us afterwards at Ethyl’s. It’ll be a fun night for everyone. 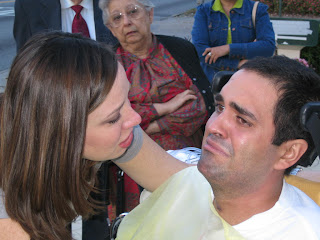 This isn’t the first time the folks at Killer Creek have hopped on the hog, so to speak, to lend us a hand. In fact, just two months after Danny’s accident, our friends organized a benefit ride. Danny was still at Shepherd, still not talking, moving or much of anything. We got permission from his doctor to take him outside for the ride as it passed by the hospital. I will never, ever forget the moment that those bikes started passing us. I watched Danny’s face and you could see the realization wash over his face as he recognized what these riders were there for; they were there for him. Passing by, waving their hands, beeping their horns and revving their engines to show him their support. And, for the first time since his accident, Danny showed an emotion; he cried big tears, as I do now reliving that moment. It was a moment for me that confirmed my Danny was still inside, alive and aware. That moment means more to me than any of that money that was raised. It was priceless.

So, three years later, our friends are doing more of the same. Showing their support and having fun while doing it. I’ve been told that Beau would have wanted Danny to benefit from the memorial ride; he would have wanted Danny to succeed. I never met Beau, but Danny remembers him, so this means the world to him. If you come out on Sunday, you’ll find Danny totally in his element; sporting his Harley shirt, shoes, wheelchair (it is orange and black and it does have the bar and shield logos on both sides), and Harley stickers all over the van. I tease him that he is a rolling advertisement for HD and we should be getting some kind of compensation for it. I guess, in a strange way, through this ride, we will be.

The 3rd Annual Chopper Classic was held on Monday, October 6th. It was a beautiful day and we had a great time. For obvious economic reasons or election reasons, we didn’t have as large a turn out as we’ve had before, but I believe those who played or who visited had fun and we raised some money at the same time. I haven’t gotten the final numbers yet, but I believe we’ll end up with between $3K – $4K. Danny’s monthly care/therapy is about $6500, so every bit helps. Thank you to those of you who played, donated, planned, helped, prayed; whatever you did, we appreciate it! It does, in fact, take a village. 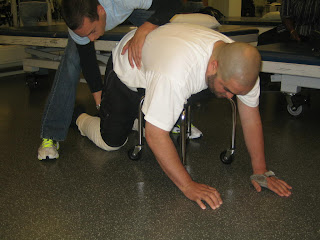 Danny has also done some new things of late and we’re very excited. In his gaiting sessions, he has begun to use his hip flexor to actually lift his right foot, rather than use the momentum of the step with his left leg to pull his right leg through. It isn’t consistent, but it is happening which leads us to believe that it can become more consistent. To help the hip flexor fire more, Danny has done a new exercise; crawling. I’ve included a photo so you can see exactly what it entails. Basically, with the support of the floor to take the weight off the leg, Danny can concentrate on just pulling the leg forward by “firing” from the hip. This exercise also helps with his balance and coordination and weight bearing for his left arm especially. All good things.

Danny has also, and I’m so excited to say, been able to do a complete sit up without pulling on anything, and from about a 28 degree incline. Well, he hasn’t just done one, but many, many by now and I can tell all the ab work they’ve been doing with Danny is really paying off. They are so focused on getting his abs built up and firing consistently that they have replaced one pool session with more exercise based activity and more exercises are based on developing his trunk control. However, the issue remains; Danny’s weight.

I am not one that is ignorant on healthy eating as I’ve had to watch my diet the majority of my life. I’ve done lots of reading and I love to cook, so I’ve researched lots of recipes. But, Danny’s weight has become my biggest frustration. How long ago did I first mention Danny’s weight problem? I mean, even when Danny began Beyond Therapy, I was excited that he’d finally be able to move some of that extra weight off. And, here we are, more than a year later and it’s not moving. As I mentioned months ago, Danny’s therapists believe that he could at least use a standard walker in the home environment if he were to lose the extra 40lbs. he carries around his middle. Hello, incentive! Well, we really hunkered down on the diet, weighed him every Friday at Shepherd and what is the result? He’s lost five pounds, gone back up five pounds, down three, back up five. It’s like a see-saw and I don’t want to see anymore of what I saw!

Like anyone of us that tries a new diet for a couple weeks with no results, what do you think Danny wants to do? Quit! Exactly! He works out in Beyond Therapy nine hours a week and on his off days, does weight lifting exercises at home and we diet. What is going on? It’s like his body is scared to let it go or something. So, we met with Dr. Kaelin.

Our appointment with Dr. Kaelin went well. He was happy with Danny’s physical improvements. We discussed Danny’s potential hearing loss. I said, WE DISCUSSED DANNY’S HEARING LOSS, for those of you like my husband that might say “what?” when I mention that. Danny gets to go get a hearing test and I’m so excited; perhaps I’ll only have to repeat myself because Danny can’t remember what I said, rather than the combination of can’t remember and can’t hear. And, of course, we discussed the diet. Dr. Kaelin wants to cut Danny’s caloric intake to 1500 calories a day. Isn’t that fun? Not that I have anything else to do, but now I have to count calories. Have you done that? I mean, in all my diet watching, I’ve never really taken the time to look at calories. It’s amazing what you learn and what you find out you didn’t want to learn. So, we go back to see Dr. K on New Year’s Eve Day to check Danny’s weight loss. If he hasn’t lost a minimum of 12-15lbs., we get to talk about options.

Right now, the only option for Danny and the only option I’d be willing to do, is liposuction. Now, like some of you, I’ve watched a few seconds of those Discovery Channel episodes where they show some plastic surgeon shoving a long metal vacuum cleaner into the abdomen of some unconscious person. I cringe at that thought for Danny, but I’ve been assured that they don’t go through the muscle which was my first concern. I mean, these ab muscles are just now getting there and now we’re going to pierce right through them? No worries since they suck the fat between the skin and the muscle. Nice picture, right? Has everyone had lunch yet? Anyway, Danny, of course, says “let’s do it now” so he doesn’t have to suffer through 1500 calorie days, but I would really like to avoid putting Danny under anesthesia again, much less thinking about that long metal vacuum and the damage it could do.

So, PLEASE pray that Danny’s body starts flushing out the fat, cause I’m about to put us all on bread and water, or chicken and water, or the rice diet, the grapefruit diet, the soup diet. Ahhh, the agony! Dramatic enough for you? But, seriously, this is a huge obstacle, pun intended and we’re all tired of fighting the fat battle.

What else? What else? Oh, Corbin and I had a mini vacation this past weekend; just the two of us. He’d started not wanting to be away from me; crying when he went to the sitters and to school and even when we tucked him in at night, he didn’t want me to leave. I figured it was about time to give him some much needed undivided attention from Mom. Thanks to Uncle Paul and Aunt Darlia, we headed up to Big Canoe and thoroughly enjoyed our time up in the mountains. We visited the pumpkin patch, took a hayride, ate hot boiled peanuts, apple fritters and warm apple donuts. We drank chocolate milk and apple cider and brought home stuff from all those places. It was a fun time just for the two of us to share together and I’m so thankful we were able to spend that time away. My husband missed us, but admittedly tells me he missed Corbin more than me. That’s a given right? I mean, he is such a great kid. We are truly blessed. Here are a couple of pictures from our weekend. 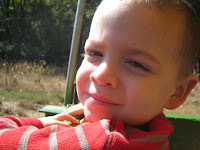 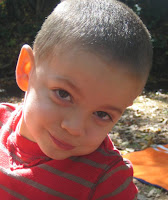 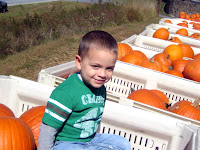 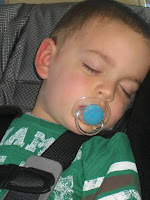 Summing up, come out and hang with us on Sunday at Killer Creek and at Ethyl’s, we had fun at the golf tourney, Danny’s doing new stuff in therapy (praise the Lord), gotta kick the weight off him and this Mama enjoyed her weekend with her boy.

Love to you all!