The video above was captured a couple weeks ago (August 13th) and shows remarkable improvement from the last video of Danny using the standard walker. No? This day Corbin was there watching so perhaps Danny was just showing off for him, but I heard too that Corbin was cheering on his daddy. 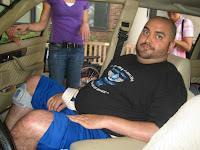 On top of that, the following Monday, August 18th, Danny attempted and accomplished car transfers. It was an exciting day for me as riding in a car has been the barometer for Danny’s personal view of improvement. The day he can ride along as a “normal person” is the day he will know he is improving. Well, Danny transferred in and out of my car twice and did fabulously. It was the look on his face that you should have seen, though. He was so excited, so pumped and actually took over telling the rest of us what to do to help him in the car. See the picture of Danny sitting in my car for the first time in over three years.

Yesterday, Monday, Danny actually rode with me in my car for the first time! He said he finally felt like a normal person. 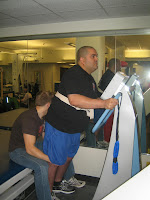 I’ve also included a picture of Danny standing on The Wave machine. I’m not sure if I’ve commented on this machine in previous posts, but it is tough. The premise is this; the platform vibrates extremely fast sending thousands of signals to the brain and throughout the body. So, while standing or kneeling on this platform, performing a particular activity, the patient is actually “in the air” for fractions of seconds. The effect is intriguing as this machine is what Danny actually says wears him out the most. In the picture, he is actually standing and doing mini squats, standing with one arm at his side and then performing weight shifts.

Also, as we continue on to great improvement, I’m proud to say that Danny has had his first session on the manual treadmill. Let me describe this; Danny is harnessed and suspended over a treadmill and unlike the Lokomat that moves his legs for him, on the manual, Danny, assisted with his therapists, steps on his own. This happened yesterday and I was very encouraged by his performance and the comments from his therapists. Obviously, the cadence was something to be figured out in Danny’s brain and he actually improved throughout the session. Where Danny had been controlling his timing, being able to think through the motions, on the treadmill, his brain and his body had to keep up with the speed.

I did have a picture here to show you, but it has disappeared for some reason. Anyway, in the picture Danny is concentrating on the activity of walking. There is actually a mirror in front of him so he can see what he needs to correct. As I mentioned before, the cadence of the motion is something new for Danny. While he thinks about straightening one leg, shifting his weight and stepping, he’s also have to do tell both legs to do different things at the same time. This will be good evidence to how well Danny’s brain is working and how it is connecting to his body. According to his therapists, it was a great first session and they were happy with how his trunk control is coming along. If the right leg would just wake up a bit more, in addtion to the weight issue.

As I’ve mentioned before, Danny has been strongly encouraged to lose weight in order to speed up his recovery. It’s been a battle to say the least in several ways. First of all, really the only thing that Danny doesn’t need assistance with is eating and ordering. So, it’s difficult to reign him in on the one thing that he has control over, yet at the same time firmly plant the benefits of dieting in his brain so he’s not looking for immediate gratification in comfort food. Needless to say, we’ve had many an arguement over the sugar content in sweet tea. Secondly, Danny has always carried his weight around his middle and has always needed to exercise in order to lose a substantial amount of weight. I liken it to we women trying to lose the caboose or the saddle bags especially after childbirth; it’s difficult to say the least.

I was approached by the BT Coordinator a couple of weeks ago concerning this seemingly neverending problem. At that time, they were wanting to get him on the manual treadmill, but it has a weight limit. They were concerned that Danny would exceed that; obviously, as you can read above, he doesn’t. However, they have begun to weigh him every Friday and have constructed an exercise program for him to perform on his off days. According to the therapists, when Danny began in Beyond Therapy, nine hours a week of exercise was sufficient for him. However, at this point, he needs much more than that. So, to Danny’s credit, he has worked out on his off days since they gave him the program and I have been cooking more at home to hopefully cut out and control calorie intake; cause I needed something else to think about, right? Down to the bottom line is this; if Danny doesn’t show weight lose in a month by reducing calories and adding exercise, we have to talk about “alternative measures” to get the weight off of him.

The weight is a significant, if not the only reason that Danny is not more independent physically. The therapists told me that Danny could be using a walker around the home environment and only using a wheelchair for the community. Basically, if Danny loses weight, he’s already equipped physically to get himself around rather than depend on the rest of us. This is a huge issue and is my highest and most important prayer request. Please pray that Danny will see the fruits of his labor, that the Lord would speed up his metabolism and that the weight would start falling off of him. 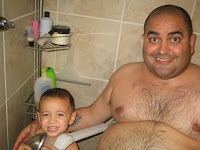 Lastly, a fun moment happened this week; Corbin got in the shower with Danny. It was so cute seeing them in there together. Although there wasn’t much room since Danny was in his shower chair, Corbin squeezed in just fine.

One thought on “Stepping On…”